One of the more common—and arguably one of the most devastating—injuries a young athlete can sustain is an ACL tear. Diana Wang, PT, DPT, ATC explains what causes ACL injuries and why she believes it’s so crucial for young women to be proactive to prevent this scary setback.


One of the most common (and arguably one of the most devastating) injuries a young athlete could sustain is an ACL tear. Your ACL, or anterior cruciate ligament, is a part of a team of ligaments in the knee that helps maintain stability and withstand the force/stress from daily movement and physical activity. The main job of the ACL is to limit forward motion of the tibia (the lower leg) on the femur (the upper leg.) The ACL also limits tibial rotation when paired with an angular force at the knee.

What Causes the ACL to Tear? 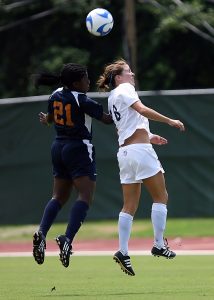 The ACL limits certain motions, but just like any other soft-tissue structure in the body, there is a limit to its limitations.

While parents often fear their young athlete will get injured from being aggressively slammed in to, the fact is that 70-78% of ACL tears are non-contact, meaning there was no involvement of external forces. The most common mechanisms of ACL tears include:

With that said, athletes in sports that involve repetitive jumping, landing or cutting—such as basketball, soccer and volleyball—are at a higher risk for ACL injuries. And what puts young athletes at even more risk? Being female.

According to the National Institutes of Health, female athletes are two to eight times more likely to suffer an ACL injury than their male counterparts. Here are three reasons why: 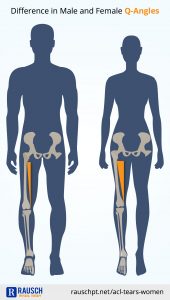 Females are born with wider hips than males; because of this, the alignment between the hips and the knee (known as the “Q-angle”) increases and makes females more susceptible to a “knocked knees” posture. This abnormal posture forces more torsion in the internal rotation and adduction angles in an attempt to create more knee stability. This then increases stress on the ACL, thus increasing risk of injury.

In general, most people have a poor quadriceps-to-hamstring ratio. However, females tend to be more quadriceps dominant during functional activity compared to males, especially during deceleration or sudden changes in direction. This quadriceps dominance produces repetitive anterior shear forces of the tibia on the femur, which then increases stress on the ACL to do its job and limit these forces. As I mentioned earlier, there is a limit to its limitations, so if the forces overpower the strength of the ACL, something’s gotta give.

During menstrual cycles or hormonal changes (Hello, puberty!), soft-tissue structures tend to loosen up, which decreases overall joint stability and therefore increases risk of injury during that time. Unfortunately this factor is the most uncontrollable, but the prescription of a specific and well-developed exercise program will prepare any young athlete to withstand the stresses of physical activity, regardless of what their body is going through.

How to Decrease the Risk of ACL Injury

Preventative rehabilitation is key to reducing risk of ACL injuries! While you can’t change anatomy, you can train your body to combat instability and the stressors that comes with physical activity. The first step for prevention is to visit a physical therapy clinic and undergo a functional movement screen with a licensed physical therapist. From there, your physical therapist will create an individualized and specialized exercise program focused on mobility and stability tailored to your needs.

Disclaimer: No movement screen will guarantee prevention of injuries. However, they are extremely useful for physical therapists to identify movement faults that may increase risk of injury.

Diana Wang graduated from the University of the Pacific with a bachelor’s degree in Athletic Training. Following graduation, she knew she wanted to pursue her love for sports rehab further and received her Doctor of Physical Therapy degree in 2017 and began her career at Rausch Physical Therapy & Sports Performance. With her extensive sports background, Diana’s goal is to provide the best, most innovative care to get athletes back in the game faster and stronger than ever.

Learn more about Diana and our other physical therapists »