This past season has been an amazing journey. I sit here now, with my Ironman AZ first place trophy for M30-34 age group and my KONA lei, and am still shell-shocked how I arrived here.  I am so incredibly blessed to have the support crew that I have around me.  Back in the very beginning of the season I found myself at the doctor’s office. I had been pushing through some hip pain for long enough and needed some professional help. I knew what was ahead. I was eyeing a race schedule that would have anyone excited.  It could be considered the ‘Best of the Best’ of triathlons around the world- Wildflower Long Course, Escape from Alcatraz, Ironman 70.3 World Championships, and finally Ironman Arizona. My goal was to qualify for Kona out in AZ, but this was 11 months away. 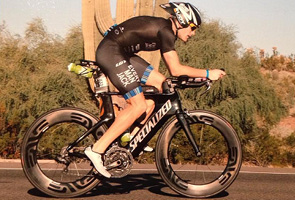 I thought it was too early to think about it, but looking back on it, I was wrong. The crew at Rausch Physical Therapy were my saviors at that time, I just didn’t know it yet. I worked with Christina and the rest of the support team there as they tirelessly worked to get my body back on track. I was stretching, doing strength work and was being educated. That’s the piece that was so valuable.

Even with my injury bringing me down in the dumps both physically and mentally, I was being built up from the inside-out. I worked with the team for about 2 months and came away a healed athlete, yes, but a better educated one as well. This is something that stuck with me throughout the season. I took better care for my body and it paid off. 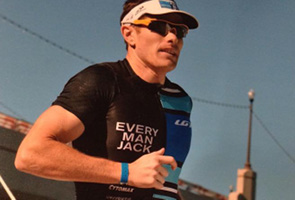 I showed up on the start line in AZ and had a certain kind of confidence that is hard to explain.  I wrote ‘CMO’ (my wife’s initials, and someone I can’t do these races without), and ‘BELIEVE’, on my hands in marker. I looked at them often during the race when I would start to lose focus or start to hear negative thoughts. My secret during races is recognizing those negative thoughts that come and embrace them. Every person will have some sort of negative thought that will come in their head during a race like Ironman and the best way to handle it is to treat it like a person. I always say, “oh hey, there you are. I was wondering when you were going to show up. You’ll have to take a seat now though because I am about to do something incredible”. 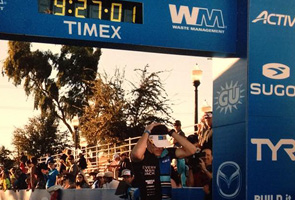 I had a solid swim and came off the extremely windy (worse than past years) bike course in 2nd place in my age group. I felt good starting the run and knew what I had trained for and knew what I was capable of. It was my time to execute that plan. I ticked off the miles and found myself in first place around mile 9. I tried not to stop and start high-fiving people at that point because I was so pumped. I have never been in first before in a 70.3 or full Ironman race like this. I went through the halfway point and threw up a #1 sign to my family cheering for me. I could feel their energy and feel the fact that they were proud of me. The next 8 or so miles were tough feeling like I was running aid station to aid station looking for sugar. I got a time from fellow teammates telling me I was about 5min up on second with only 5 miles to go. I was running scared but at the same time, I BELIEVED!

There were moments where I wanted to walk and give up. But there were more times when I felt like I was floating and had visions of what I would do going down the finishing chute as an age group champ.  It’s funny how things really play out though. That last mile was damage control and even tunnel vision. All I had left when I crossed the finish line was me putting my hands on my head in shock- I couldn’t believe what I had just done. I wanted to share my excitement with my family immediately. I wanted to hug them. I was just too crushed to do so. It would have to wait until a later time. I was KONA bound. But better yet, I was a changed athlete, and I truly believe it was due to the education I received early on from the crew at Rausch. They laid the foundation, I built it up. They believed in me and I am forever grateful. Thanks for reading.